"Solace" And Other Short Works For Piano Scott Joplin 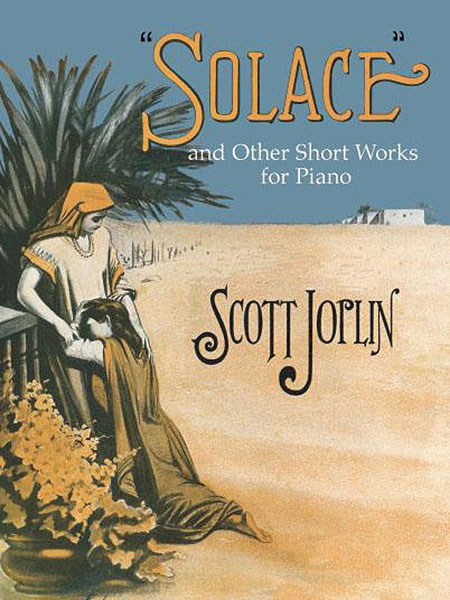 "Solace" and Other Short Works for Piano--Scott Joplin
Composed by Scott Joplin (Except Where Noted)
Softcover Book
Arranged for Piano
Dover Publications, Inc.

Dubbed by his publisher as the "King of Ragtime writers," Scott Joplin (1868–1917) was the most influential ragtime composer of all time, mainly because he wrote the first popular hit of that genre — "Maple Leaf Rag" — which sold a million copies of sheet music and gave Joplin enough royalties to make it possible for him to give up playing and do instead the things he loved the most: teaching and composing.
Joplin was much more than just a ragtime composer, as can be seen in this vibrant collection of short works for piano. In addition to the title piece, "Solace — A Mexican Serenade," a syncopated tango that rose to international fame with its inclusion in the soundtrack of the 1972 movie The Sting, this compilation features 10 of Joplin's lively two-steps, marches, and waltzes: "Great Crush Collision," "Combination March," "Harmony Club Waltz," "Augustan Club Waltz," "March Majestic," "Bethena — A Concert Waltz," "Rosebud — Two-Step," "Binks' Waltz," "Antoinette — March and Two-Step," and "Lily Queen — A Ragtime Two-Step." Ranging in date of composition from 1896 to 1909, the pieces are reprinted here from original Joplin first editions, with reproductions of the original sheet-music covers.