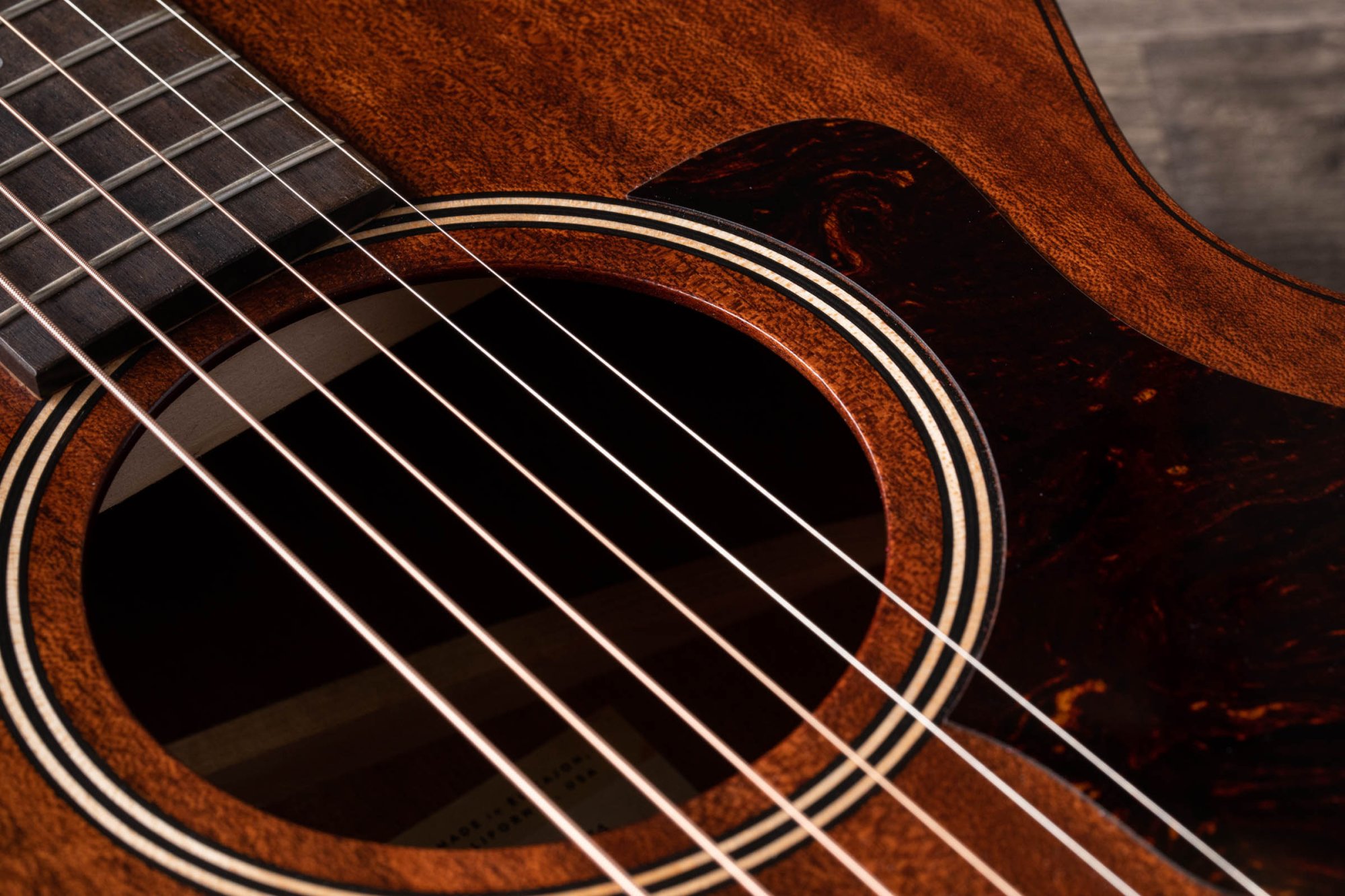 We have this in stock!
WARNING: Cancer and Reproductive Harm. For more information go to www.P65Warnings.ca.gov
Taylor American Dream AD22e


Crafted at the intersection of solid-wood tone and great value, the AD22e is the first Grand Concert entry in Taylor's American Dream Series of acoustic guitars. Solid sapele back and sides and a mahogany top resonate with a warm, woody voice that's especially focused in the midrange. The hardwood top helps provide balance with a varied attack, while the V-Class bracing articulates the top to produce louder volume and longer sustain.

The AD22e offers players all the warm, seasoned tone, workmanlike style and exceptional value of the American Dream Series in a compact, accommodating Grand Concert frame. Featuring all-solid-wood construction and our tone-enhancing V-Class bracing, this model’s mahogany top pairs with sapele back and sides for a rich response with a bold midrange character and clear, pristine highs. The Grand Concert’s 24-7/8" scale length makes for a relaxed, slinky feel that will please fingerstylists and traditional pickers alike, while the hardwood top helps to even out the attack for a more balanced sound all the way down the neck. Chamfered body edges provide an even more intimate feel, while the ultra-thin matte finish preserves the guitar’s performance-forward aesthetic. Other visual details include 4mm dot fretboard inlays in Italian acrylic, black top purfling, a faux-tortoiseshell pickguard and a single-ring rosette. The non-cutaway AD22e includes our ES2 acoustic pickup and ships with a lightweight, durable AeroCase.

Sapele
Sapele’s tonal output is consistent and balanced across the tonal spectrum, making it compatible with a diverse range of playing styles. It’s comparable to mahogany but its higher density tends to produce a slightly brighter sound with more top-end shimmer.
Origin: West Africa
Used On: 300 Series, Acoustic 3 Series, Laminate 100 Series, GS Mini, Baby and Big Baby
An alternative tonewood that joined the Taylor fold over a decade ago. It’s sometimes mistakenly referred to as African mahogany because it closely resembles the West African wood khaya, which is commercially known as African mahogany. Sapele is a highly sustainable, relatively fast-growing wood. Tonally, it does everything that mahogany does, with a little extra treble zing. We’ll be able to offer it for a long, long time.
Goes Well With: Everything. Like ovangkol, it’s a great all-purpose tonewood that will deliver a consistent, balanced tone in a variety of playing applications, from fingerstyle to strumming.

Tropical Mahogany
As a top wood, mahogany produces a natural compression, so it won’t yield as quick a response as a spruce-top guitar will. A mahogany-top guitar will produce strong fundamentals, with clear and direct focus. It might be characterized as having a woody, dry tone.
Origin: Central and South America
Used On: 300 Series, 500 Series, American Dream Series, GT Series, GS Mini, Baby Taylor,
A hardwood top with more density than spruce or cedar
The stiffness initially yields a bright tone that gradually gets deeper
Harder, denser woods like mahogany and koa that are used on the back and sides of a guitar are sometimes used as tops. Their stiffness initially translates into a bright tone and tends to need more play-in time to open up, but the more a mahogany-top guitar is played, the more it develops overtones that contribute to a fuller, richer sound. A mahogany-top guitar might appeal to rootsy players who like a little extra punchiness in their tone.
Goes Well With: Blues and roots players, anyone who likes an slightly more burly or punchy quality to their tone.

The Taylor Expression System® 2 (ES2) is a revolutionary pickup design that delivers the latest in Taylor’s ongoing innovation in acoustic guitar amplification. The heart of the Expression System 2 is Taylor’s patented behind-the-saddle pickup, which features three uniquely positioned and individually calibrated pickup sensors. The location of the sensors enables a more dynamic range of acoustic sound to be captured than ever before. Together with Taylor’s custom-designed “professional audio”-grade preamp, this system produces exceptional amplified tone and responsiveness. On stage through a PA, plugged into your favorite acoustic amplifier, or direct into recording software, the Expression System 2 faithfully conveys the voice of your Taylor guitar.

Behind the ES2 Design: Rethinking the Piezo Pickup
For decades, piezo-electric transducers have been positioned under the saddle of a guitar based on the long-held belief that the string and top vibration cause the saddle to “bounce” up and down. But Taylor’s electronics team, led by developer David Hosler, discovered that the vertical movement is actually heavily restricted, and that the saddle gets “locked down” due to the string tension’s downward pressure. That’s why a traditional under-saddle pickup with piezo-electric crystals often responds with a sound often characterized as thin, brittle, brash or synthetic, especially with more aggressive playing.

The saddle’s natural range of movement as the guitar is being played is actually back and forth like a pendulum. That revelation led Taylor’s design team to relocate the crystals from under the saddle to behind it. The new positioning enables the crystals to respond more naturally to the guitar’s energy as it is transferred through the saddle. Three pickup sensors are installed behind the saddle, through the bridge, with three tiny Allen screws that calibrate the position of the sensors in relation to the saddle.

Like the original Expression System, the ES2 features the same volume and tone control knobs. The preamp is similar but with a slightly different gain structure. As a result it will be about 25 percent hotter, which is more in line with other pickups. This makes it plug-and-play friendly both for artists and live sound mixers

Bracing
Bracing is the internal architecture, featuring an arrangement of wooden struts, that strengthens the top and back of an acoustic guitar, creating a strategic balance between stiffness and flexibility. This helps translate the air movement produced by the vibrating guitar strings and soundboard into volume, sustain and other musical properties. The nuances of each bracing pattern help “voice” a guitar, working in concert with its body dimensions and tonewoods to flavor its sound.

In our ongoing drive to refine the tone of our guitars, our bracing designs have steadily evolved over time. Led by Taylor master guitar designer Andy Powers, our latest innovative bracing designs offer a rich and diverse musical palette for players to explore. Below are several types of soundboard bracing offered with our guitar line.

V-Class™ Bracing
Our patented V-Class bracing is a revolutionary new pattern — a new sonic engine — that marks a major shift away from traditional steel-string bracing patterns. By allowing the soundboard to flex naturally while maintaining rigidity along the center (in the direction of the strings), V-Class helps enhance the volume and sustain. It also creates a more orderly response from the soundboard. Up and down the fretboard, notes are full, true and consistent, with more harmonic agreement. It represents an entirely new design platform that can be adapted to different body styles in different ways to infuse each with a unique sonic personality.